Many think of peanut butter as a mere American matter and are not aware that the Dutch also have been claiming this domain of tasty spicy peanut bread toppings since a long time. Peanut butter is called pindakaas in the Netherlands, which might sound a little bit irritating at first, because cheese is in fact not involved in the production of pindakaas. Pindakaas mainly consists of peanuts, vegetable oils, milk and butter.

For more than 100 years, Calvé has been committed to making the best quality mayonnaise. Not only Calvé's mayonnaise is packed with flavor, but also the sauces, dressings and of course the peanut butter. 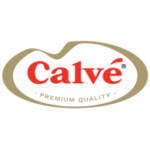